What’s the connection between a water pistol and this gigantic crane? On the face of it, no connection at all. But think about the science behind them and you’ll reach a surprising conclusion: water pistols and cranes use the power of moving liquids in a very similar way. This technology is called hydraulics and it’s used to power everything from car brakes and garbage trucks to motorboat steering and garage jacks. Let’s take a closer look at how it works!

You can’t squash a liquid!

Gases are easy to squash: everyone knows how easy it is to squeeze a balloon. Solids are just the opposite. If you’ve ever tried squeezing a block of metal or a lump of wood, with nothing but your fingers, you’ll know it’s pretty much impossible. But what about liquids? Where do they fit in? You probably know that liquids are an in-between state, a bit like solids in some ways and a bit like gases in others. Now, since liquids easily flow from place to place, you might think they’d behave like gases when you tired to squeeze them. In fact, liquids are virtually incompressible—much like solids. This is the reason a belly flop hurts if you mess up your dive into a swimming pool. When your body smacks into the pool, it’s because the water can’t squeeze downwards (like a mattress or a trampoline would) or move out of the way quickly enough. That’s also why jumping off bridges into rivers can be very dangerous. Unless you dive correctly, jumping off a bridge into water is almost like jumping onto concrete. (Find out more about solids, liquids, and gases.) 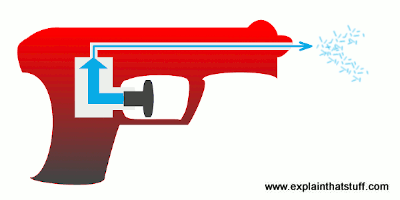 The fact that liquids don’t compress easily is incredibly useful. If you’ve ever fired a water pistol (or a squeezy washing-up liquid bottle filled with water), you’ve used this idea already. You’ve probably noticed that it takes some effort to press the trigger of a water pistol (or to squeeze water from a washing-up bottle). When you press the trigger (or squeeze the bottle), you’re having to work quite hard to force the water out through a narrow nozzle. You’re actually putting pressure on the water—and that’s why it squirts out at a much higher speed than you move the trigger. If water weren’t incompressible, water pistols wouldn’t work properly. You’d squeeze the trigger and the water inside would simply squash up into a smaller space—it wouldn’t shoot out of the nozzle as you’d expect.

If water pistols (and squeezy bottles) can change force and speed, that means (in strict scientific terms) they work just like tools and machines. In fact, the science of water pistols powers some of the world’s biggest machines—cranes, tipper trucks, and diggers.

Turn a water pistol on its end and this is (crudely simplified) what’s going on inside: 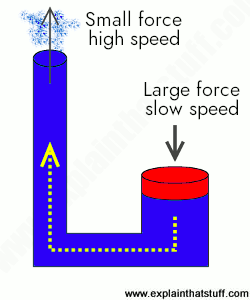 When you press on the trigger (shown in red), you apply a relatively large force that moves the trigger a short distance. Because the water won’t squeeze into a smaller space, it gets forced through the body of the pistol to the narrow nozzle and squirts out with less force but more speed.

Now suppose we could make a water pistol work in reverse. If we could shoot liquid into the nozzle at high speed, the water would flow the opposite way and we’d generate a large upward force on the trigger. If we scaled our water pistol up many times, we could generate a big enough force to lift things. This is exactly how a hydraulic ram or jack works. If you squirt fluid through a narrow tube at one end, you can make a plunger rise slowly, but with a lot of force, at the other end: 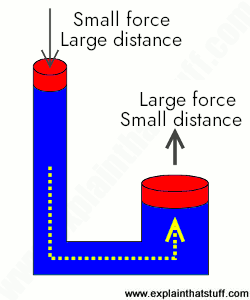 The science behind hydraulics is called Pascal’s principle. Essentially, because the liquid in the pipe is incompressible, the pressure must stay constant all the way through it, even when you’re pushing it hard at one end or the other. Now pressure is defined as the force acting per unit of area. So if we press down with a small force on a small area, at the narrow end of the tube on the left, there must be a large force acting upward on the larger area piston on the right to keep the pressure equal. That’s how the force becomes magnified.

Another way to understand hydraulics is by thinking about energy.

We’ve already seen that hydraulic rams can give us more force or speed, but they can’t do both at the same time—and that’s because of energy. Look again at the water pistol graphic up above. If you press down quickly on the narrow pipe (with a little bit of force), the plunger on the wide pipe rises slowly (with a lot of force). Why would that be? A basic law of physics called the law of conservation of energy says we can’t make energy out of thin air. The amount of energy you use to move the plunger is equal to the force you use times the distance you move it. If our water pistol produces twice as much force at the wide end as we supply at the narrow end, it can only move half as far. That’s because the energy we supply by pushing down is carried right around the pipe to the other end. If the same amount of energy now has to move twice the force, it can only move it half the distance in the same time. That’s why the wider end moves more slowly than the narrow end.

You can see hydraulics at work in this digger. When the driver pulls a handle, the digger’s engine pumps fluid into the narrow pipes and cables (shown in blue), forcing the hydraulic rams (shown in red) to extend. The rams look a bit like bicycle pumps working in reverse. If you put several rams together, you can make a digger’s arm extend and move much like a person’s—only with far greater force. The hydraulic rams are effectively the digger’s muscles:

Each ram is working like a diesel-powered water pistol in reverse: 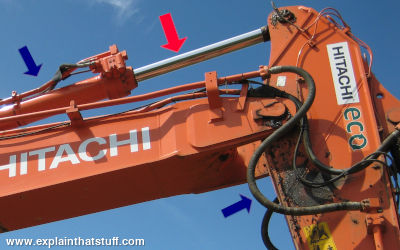 The engine is pumping hydraulic fluid through one of the thin pipes to move the thicker ram out with much greater force, like this:

You might be wondering how a hydraulic ram can move both inward and outward if the hydraulic fluid is always pushing it from one direction. The answer is that the fluid doesn’t always push the same way. Each ram is fed from opposite sides by two separate pipes. Depending on which way the fluid moves, the ram pushes either inward or outward, very slowly and smoothly, as this little animation makes clear:

Next time you’re out and about, see how many hydraulic machines you can spot. You might be surprised just how many trucks, cranes, diggers, dumpers, excavators, and bulldozers use them. Here’s another example: a hydraulic hedge-cutter on the back of a tractor. The cutting head needs to be sturdy and heavy to slash through hedges and trees and there’s no way the driver could lift or position it by hand. Fortunately, the hydraulic controls do all that automatically: with several hydraulic joints, a bit like a shoulder, elbow, and wrist, the cutter moves with as much flexibility as a human arm:

Not all hydraulic machines are so obvious, however; sometimes their hydraulic rams are hidden out of sight. Elevators (“lifts”) keep their workings well hidden, so it’s not always apparent whether they’re working in the traditional way (pulled up and down by a cable attached to a motor) or using hydraulics instead. Smaller elevators often use simple hydraulic rams mounted directly underneath or alongside the lift shaft. They’re simpler and cheaper than traditional elevators, but can use quite a bit more power.

Motors are another example where hydraulics can be hidden from view. Traditional electric motors use electromagnetism: when an electric current flows through coils inside them, it creates a temporary magnetic force that pushes against a ring of permanent magnets, making the motor shaft rotate. Hydraulic motors are more like pumps working in reverse. In one example, called a hydraulic gear motor, the fluid flows into the motor through a pipe, making a pair of closely meshing gears rotate, before flowing back out through another pipe. One of the gears is connected to the motor shaft that drives whatever the motor is powering, while the other (“the idler”) simply turns freely to make the mechanism complete. Where a traditional hydraulic ram uses the power of a pumped fluid to push the ram back and forth a limited distance, a hydraulic motor uses continuously flowing fluid to turn the shaft for as long as necessary. 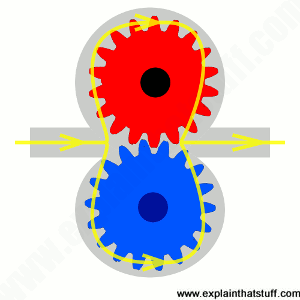 Why would you use a hydraulic motor instead of an electric one? Where a powerful electric motor generally needs to be really big, a hydraulic motor just as powerful can be smaller and more compact, because it’s getting its power from a pump some distance away. You can also use hydraulic motors in places where electricity might not be viable or safe—for example, underwater, or where there’s a risk of electric sparks creating a fire or explosion. (Another option, in that case, is to use pneumatics—the power of compressed air.)

The VRC VI positioner has an integral I/P module that is approved for general purpose and hazardous
locations areas. The main positioner housing offers no protection for use in hazardous locations as defined by
the NEC (National Electrical Code).

For Transmitter and switch options
The use of the T1 or T2 transmitter is for use in only general purpose areas and not hazardous areas.

For limit switch requirements the S1 and S2 options can be used in accordance with the NEC (National
Electrical Code) in the following manor in hazardous locations.

The S1 and S2 switch options are simple passive sets of switches that can be used with the correct and proper
Intrinsically Safe barrier for the hazardous location. In addition, the S2 switch option is a set of hermetically
sealed glass to metal sealed switches that may be used in Division 2 areas as defined by the NEC (National
Electrical Code).
Important Note: In all Hazardous Locations insure your
installation meets all safety requirements of the NEC and
your local authority.

The VRC VI positioner has an integral I/P module that is approved for general purpose and hazardous
locations areas. The main positioner housing offers no protection for use in hazardous locations as defined by
the NEC (National Electrical Code).

For Transmitter and switch options

The use of the T1 or T2 transmitter is for use in only general purpose areas and not hazardous areas.

For limit switch requirements the S1 and S2 options can be used in accordance with the NEC (National
Electrical Code) in the following manor in hazardous locations.

The S1 and S2 switch options are simple passive sets of switches that can be used with the correct and proper
Intrinsically Safe barrier for the hazardous location. In addition, the S2 switch option is a set of hermetically
sealed glass to metal sealed switches that may be used in Division 2 areas as defined by the NEC (National
Electrical Code).

Important Note: In all Hazardous Locations insure your installation meets all safety requirements of the NEC and your local authority.